Today's Update will be about the continuity of the core mechanics : Infection and Hunger

This week I worked on one other important core mechanic of the game, the Infection and the Hunger system.
The horde you control is very hangry. And the more they are the faster their hunger grow. In order to maintain their hunger at a reasonable level you'll have to eat the Humans.
In the meanwhile, when you fight against Humans, they become infected when they are on the point to die. Their infection will mutate them into a Zed after a lapse of time (10s for the sake of the prototype). But other Humans won't let the virus spread without moving, they'll try to finish the infected ones and kill them. You'll have to think smart and establish a good strategy to build your horde because the Infected that are killed by their friends will never be an Undead and will only serve as a good meal, that's all.

Here are some screenshots of the Infection and Hunger Mechanics :

It's growing and growing ...

What's happening below may be difficult to understand, the Humans are actually killing their agonysing infected friend before they mutate into a Zed. "sorry buddy" is the only feedback for now that represents their act of mercy.Another thing that's happeing here, is the Feeding Frenzy. When the Zeds are eating a dead corpse they enter into a Frenzy state that prevent them from doing anything else than eating. This state takes end when the corpse is entirely eaten or if the player interrupts the Frenzy by releasing the Feeding button, which needs a cooldown before it can be used again.
Of course with all the animation assets that will be done later, this cannibalism scene will have a more dramatic effect.

Aaaand another milestone accomplished this week! =D
And guess what? I can finally jump into the assets production! Yes, the fun part has arrived.
Developing the core mechanics and gameplay is a really cool part, but at some point we need more than cubes and clay shaders in order to stay motivated! In every of my projects I try to jump into graphics and mood stuff fairly rapidly before the motivation goes down.
Giving the game you are working on the look you want to achieve, also helps people to have a better vision of your game so they can project themselves into it and they, also, get motivated for the game release!

Speaking of which, here's a sneak peak on the Voxel modeling of the basic type of Zeds and their different state of decay : 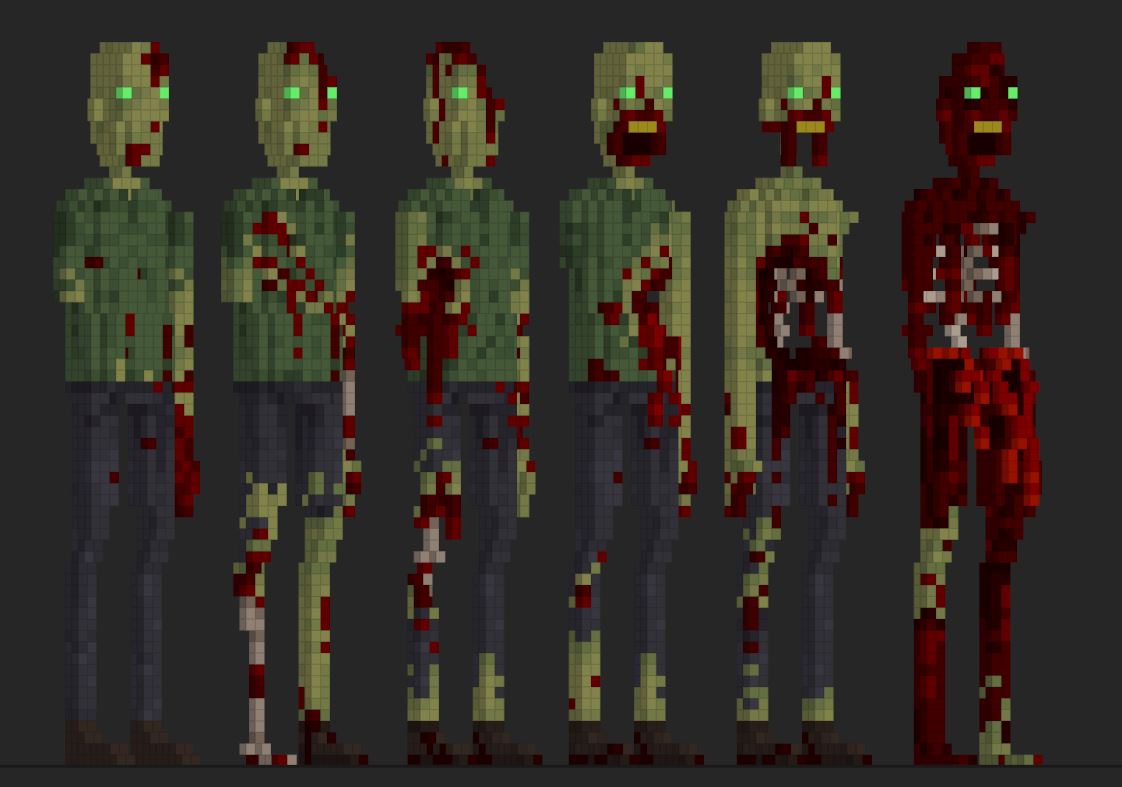 Next week there will be more assets done such as the Humans characters and maybe a beginning of the environment.
While I'm in the assets production process, I'm continuing to think and design some gameplay and mechanics stuff on the paper before jumping back into development and programmation.
Next milestone : finishing the main game assets

Stay tuned, see you next week!

Are you still hungry?